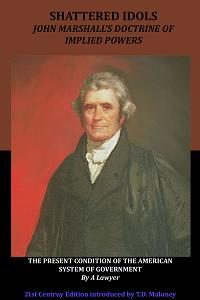 A cogent analysis and criticism of John Marshall, his doctrine of implied powers, and how it has impacted the American system of government. Originally released around the turn of the 20th Century, this work is just as relevant today. Shattered Idols proved to be so controversial in its time that the original publisher suppressed the work. A must-read for anyone interested in the U. S. Constitution, state and individual rights, current events or politics.

Whether you are a strict constructionist, a believer of implied powers, a fan or opponent of judicial activism, or just looking for an interesting topic, Shattered Idols is worth your time.